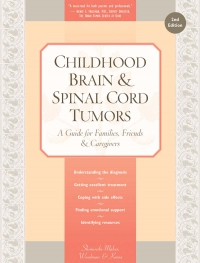 Extended family—grandparents, aunts, uncles, cousins—can cushion the shock of diagnosis and treatment with loving words and actions. Extended family members sometimes drop their own lives to rush to the side of the newly diagnosed child, and often remain steadfast throughout the months or years of treatment. Regrettably, some family members are not helpful, either out of ignorance about what your family needs or simply because they are frightened by the diagnosis or overwhelmed by events in their own lives.

Some extended families, and even entire communities, rally around the family, but for other families, support never materializes. Several factors affect the strength of support that is offered: well-established community ties, good communication within the extended family, physical proximity to the extended family, and clear exchange of information about the needs of the affected family. If any of these elements are missing, support may dissipate or never appear.

We had just moved 3,000 miles away from family and friends for my husband to accept a new job. We had no family close by, no friends. Each family member and some close friends used their vacations to fly out and take 2-week shifts at our new house to help out. Thankfully, they got us through the first months, but the rest of treatment was lonely.

Shortly after Jesse’s medulloblastoma returned, I was praying with my Bible study group. With four children ages 1 to 9, I just didn’t know how we would manage with one parent 100 miles away at the hospital and one parent working. The group decided to collect enough money to allow my sister to quit her job and move in to take care of our other three children while I was at the hospital with Jesse. She stayed for 8 months. It was such a wonderful thing. They didn’t even ask us; they just said they would support her financially so she could care for my children and keep the household running.

Grandparents grieve deeply when a grandchild has cancer. They are concerned not only for their grandchild, but also for their own child (the parent). Cancer wreaks havoc with grandparents’ expectations, reversing the natural order of life and death. Grandparents frequently say, “Why not me? I’m the one who is old.” A brain or spinal cord tumor in a grandchild is a major shock to bear.

Many parents reported that the grandparents responded to the crisis with tremendous emotional, physical, and financial support.

My mother was a rock. She lived far away, but she put her busy life on hold to come help. She took care of the baby and kept the household running when I was living at the hospital with my very ill child. She was strong, and it gave me strength.

John is Grampa’s only grandchild. He’s always there to play a board game, tell jokes, or watch his favorite video with him for the 1,000th time. I wish he’d hide his fears a little better, but that may be too much to expect from a truly loving grandfather.

Other families are not as fortunate. Many grandparents are too old, too ill, or simply unable to cope with a crisis of this magnitude. Some simply fall apart.

My mother-in-law became hysterical when my daughter was diagnosed. She called every day, sobbing. Luckily, she lived far away, and this minimized the disruption. We had to ask her not to come, because we just couldn’t handle the catastrophe at home and her neediness too. It hurt her feelings, but we just couldn’t cope with it.

Other grandparents allow pre-existing problems with their adult child to color their perceptions of what the family needs or what role they should take on during the crisis. For example, sometimes cancer allows grandparents to renew criticism of the way grandchildren are being raised.

While we stayed at the hospital, the grandparents moved into our house to care for our 8-year-old daughter. They decided that this was their chance to “whip her into shape, teach her some manners, and get her room cleaned up.” Our daughter was in tears, and we ended up saying, “We appreciate your help, but we will take over.”

It is hard to predict how anyone will react to the diagnosis of childhood cancer. Grandparents are no exception. Some respond with the wisdom gleaned from decades of living, others become needy or overbearing, and some withdraw. It is natural in a time of grave crisis to look to your parents for support and help, but it is important to remember that grandparents’ ability to respond also depends on events in their own lives. If problems between family members develop, help can be obtained from hospital social workers or through individual counseling.

Helpful things for extended family members to do

Families differ in what is truly helpful for them. The suggestions in this chapter are snapshots of what some families appreciated. True listening and working on maintaining your relationships are paramount. Connections can be made in many different, unique, and personally meaningful ways. Extended family members of the family dealing with cancer should try to support them in ways that respect their wishes, while also honoring their privacy.

Parents of the ill child may want to share the following suggestions with their extended family and friends so they have a better idea of how to help.

Our relatives who lived close to the hospital had teenagers. One was a candy striper at Children’s on Saturdays. The aunts, uncles, and cousins came to visit several times a week any time he was in the hospital during his years of treatment. They were all very supportive, very positive, and fun to be around.

The first 3 days in the hospital I spent much of my time crying on the phone when talking to friends and relatives. Then I realized how frightening this must be to my 2-year-old. So I just took the phone off the hook and left it there. Now, each time Jennifer is hospitalized, I call one friend and have her spread the news. Then I take the phone off the hook again and concentrate on my daughter.

We plastered the walls with pictures of family and friends, and so many people sent balloons that the ceiling was covered. It was a lovely sight.

My brother Bill and his wonderful girlfriend, Cathleen, created an exciting “trip” for my 4-year-old daughter. She was bald, big-bellied from prednisone, and her counts were too low to leave the house, but her interest in fashion was as sharp as ever. Bill and Cathleen bought 10 outfits, rigged up a dressing room, and with Cathleen as saleswoman, turned Katy’s bedroom into a fashion salon. She tried on outfits, discussed all of their merits and shortcomings, and had a fabulous time. It was a real high point for her.

A friend who was a nurse came to my son’s room shortly before Christmas and brought an entire gingerbread house kit, including confectioner’s sugar for the icing. We had a very good time putting it together.

A close friend (who lived 3,000 miles away) had just lost her job and wished she could be there for us. My parents gave her their frequent flyer miles. She flew in for 3 weeks during a hard part of treatment and helped enormously.

Our family friend John is terrified of needles. John always avoided giving blood. John doesn’t like going to the doctor. But John showed up to donate platelets once, early on, and we found that he was a great platelet match for Deli. So he kept returning to that awful two-needle machine that you stay hooked onto for 3 hours at a time, probably a couple dozen times, because we needed him. Then we had Beth, who was one of my professional acquaintances. Beth was always pretty nice to us, but she found out that she too was a good “sticky” platelet donor. Probably at least a dozen times she took hours out of her work day and donated platelets whenever Deli needed some. We concentrated on the few “star” friends and relatives, the one or two people whose attitude, abilities, and circumstances allowed them to be the most helpful.