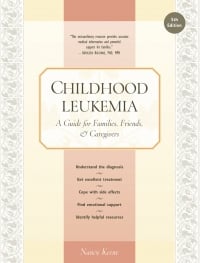 JMML is difficult to diagnose and treat. A tentative diagnosis of JMML may be made after a physical examination of the child and microscopic analysis of a blood sample. But it is extremely important that your child be seen at a major pediatric medical center that uses a certified central laboratory to identify any mutations or chromosomal abnormalities in your child’s cancer cells. Because JMML is rare and the signs and symptoms mimic other illnesses, diagnosis can be swift or very slow.

My son Jacob had been sick off and on and developed bruises and red spots on his hands and feet when he was seven months old. Just before his first birthday, he developed a golf-ball sized staph-infected lymph node in his neck that was surgically removed at the local hospital. Less than a week later he developed a staph infection in his foot where the IV had been. Shortly after that, he was hospitalized with Epstein-Barr virus, and they discovered an enlarged spleen and liver. He was transferred to a regional children’s hospital, where they did a bone marrow aspiration and ruled out leukemia. Within two weeks we were sent back to that hospital for another bone marrow aspiration, and 15-month-old Jacob was diagnosed with JMML with a PTPN11 mutation.

To diagnose JMML, your child’s doctor will first obtain a complete medical history, do a thorough physical exam, and order a number of different tests including:

These procedures and tests are described in Chapter 9, Coping with Procedures and Appendix A, Blood Tests and What They Mean.

My infant daughter Rayne started having episodes of vomiting and gastrointestinal distress when she was three months old. At six months old, she started projectile vomiting. Her doctor thought it was an allergy to formula, but no matter what we tried, she couldn’t keep anything down. We took her to the ER and they gave her a lot of fluids and took labs. Two hours later, the director of the ER came in and told us that we needed to go by ambulance to the children’s hospital because her WBC count was 68,000. At that hospital, they did a bone marrow aspiration but didn’t find anything wrong so they sent us home with instructions to have weekly labs. During that time, her WBC count fluctuated between 70,000 and 90,000. After six weeks, we went in for a follow-up visit at the hospital and the hematologist said, “Good news! We have a diagnosis—JMML with a CBL germline mutation.”