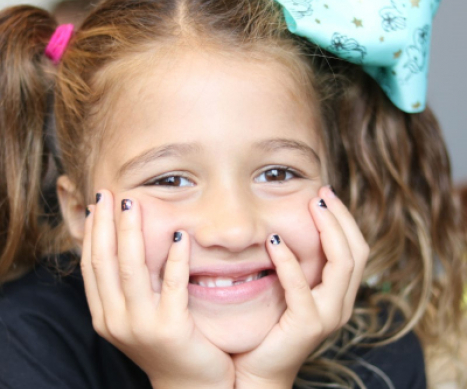 Lakelynn is 6 years old. She loves horses, Barbies, singing, shopping at Target and hosting lemonade stands in her home state of North Carolina.

When she was 3 years old, she began complaining about a “boo-boo” in her arm. Her first X-ray showed nothing. But Lakelynn kept having pain—which at this point had gotten so intense that it was affecting her sleep. The pediatrician suggested that maybe Lakelynn was using this as an excuse to avoid bedtime. However, her parents knew there was something more to the story. Lakelynn’s pain was in the exact same spot—it seemed bigger than just a behavioral problem.

Trusting their instinct, her parents, Leslie and Mike, saw an orthopedic specialist and asked for another X-ray, which showed a spot. That spot led to an MRI. The MRI showed a tumor wrapped around the nerves that control Lakelynn’s right arm.

At first, no one knew how to treat Lakelynn. The location of the tumor made it both inoperable, and dangerous to radiate.  Even a biopsy was risky because of the potential of nerve damage. But, they needed a tissue sample, so a biopsy was performed without incidence. Samples were sent to pathologists all over the country who characterized it as a type of sarcoma, but were unable to give a clear diagnosis that could inform a treatment plan. While the family waited for answers, Lakelynn began medication to manage the intense pain in her arm.

By now, Lakelynn had stopped using her right arm altogether.

Meanwhile, Lakelynn’s oncologist also had the family send a sample off for advanced genomic testing to look at the RNA of the tumor. This testing revealed her tumor harbored the NTRK gene fusion. Luckily, one of the doctors reviewing Lakleynn’s case knew of a clinical trial for kids with cancer driven by this mutation.

Within 48 hours, Lakelynn was in Boston and began a clinical trial led by Dr. Steven DuBois at the Dana-Farber Cancer Institute, an ALSF Center of Excellence grant institution.

Lakelynn has been on the clinical trial for nearly three years. The trial drug, larotrectinib shrunk Lakelynn’s tumor significantly. Lakelynn continues to have stable disease and travels to Boston once a month for follow-ups and medication. The drug has minimal side effects--as compared to conventional treatment. For now, Lakelynn is still searching for her cure, but the clinical trial has made it possible for her to go from being a little girl in pain to a little girl who loves going to school and celebrating Christmas, with a big, beautiful smile.

Hero quote: "I wanna get rid of cancer.” - Lakelynn

Donate in Honor of Lakelynn Today!