The story of a girl with a mission to help all kids with cancer. 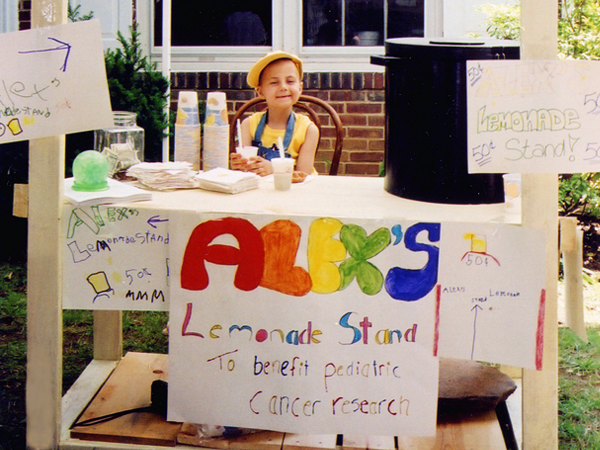 Explore this section to learn how Alex's legacy continues.

The story of a girl with a mission to help all kids with cancer.

Explore this section to learn about Alex and how her legacy continues.

Alexandra “Alex” Scott was born to Liz and Jay Scott in Manchester, Connecticut on January 18, 1996, the second of four children. She had three brothers, her older brother Patrick and two younger brothers, Eddie and Joey.

Shortly before her first birthday, Alex was diagnosed with neuroblastoma, the most common type of childhood cancer found in infants under 1. Doctors told Alex’s parents that if she beat her cancer, they did not think she would ever walk again. Just two weeks later, Alex slightly moved her leg at her parents’ request to kick. This was the first sign of who she would turn out to be — a determined, courageous, confident and inspiring child with big dreams and big accomplishments.

Learn more about childhood cancer in this printable infographic.

By her second birthday, Alex was crawling and able to stand up with leg braces. She worked hard to gain strength and to learn how to walk. She appeared to be beating the odds, until the discovery that her tumors had started growing again. In 2000, the day after her fourth birthday, Alex received a stem cell transplant, where doctors put new, healthy cells in her body to try and grow more healthy cells after treating her cancer.

Alex told her mother, “When I get out of the hospital I want to have a lemonade stand.” She wanted to give the money to doctors to allow them to “help other kids, like they helped me.” True to her word, she held her first lemonade stand later that year with the help of her older brother and raised an amazing $2,000 for “her hospital.”

The Stand Seen Around the World

While bravely battling her own cancer, Alex and her family continued to hold yearly lemonade stands in their front yard to benefit childhood cancer research. News spread of the remarkable sick child dedicated to helping other sick children. People from all over the world, moved by her story, held their own lemonade stands and donated the proceeds to Alex and her cause.

In August of 2004, Alex passed away at the age of eight, knowing that, with the help of others, she had raised more than $1 million to help find a cure for the disease that took her life. Alex’s family and supporters around the world are committed to continuing her inspiring legacy through Alex's Lemonade Stand Foundation. Today, the Foundation has raised more than $250 million and funded over 1,000 research projects across the country.

The History of ALSF

Kids across the globe honor Alex’s legacy by finding unique ways to help kids with cancer. Read some of those inspiring stories and how Alex has impacted the fight against childhood cancer here:

Bella putts for a cure

If you want to help Alex’s dream of a world without childhood cancer come true, click below to learn about exciting ways you can get involved!

Here are some pictures of Alex you can use for your project.

Click here for more downloadable pieces you can print out for the class including coloring pages, an activity sheet and more!