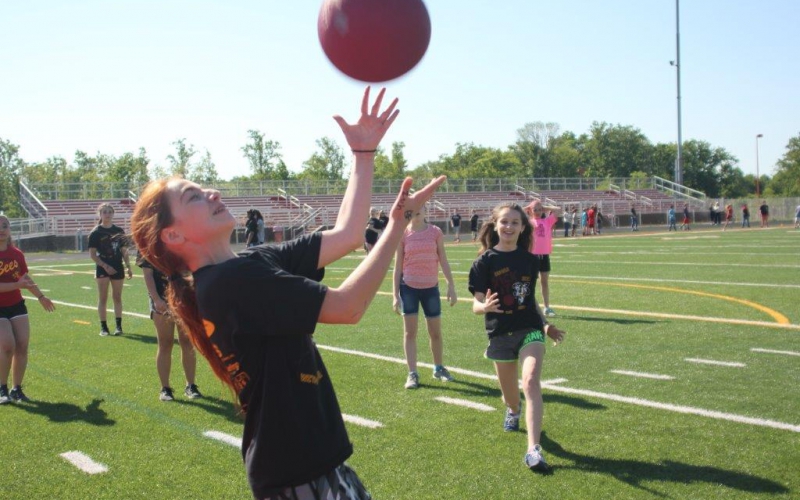 When childhood cancer hero Quinn Clarke started Kick-It, he thought of it as a way to bring his community together to support childhood cancer research by hosting charity kickball games. Now, millions of dollars later, Kick-It has expanded well beyond kickball to include any sport with ALSF games. Now, everyone can join the fight and help fund cures for childhood cancer.

Whether you love kickball, pickleball, dodgeball or any game in between, you can help! The key is fundraising before the game gets rolling.

Here are a few ways supporters have made their events successful:

One of the best ways to get started is by letting students lead the way! Their creative ideas can catalyze the community to pitch in, whether it’s through a car wash, lemonade stand or bake sale. Maria Schneider, a teacher at Broadview Heights Middle School, even had students organize their own vendor system, where they can sell baked goods, crafts or anything else to fellow classmates during the school day to raise funds. You will be amazed how much kids can raise.

Maria Schneider’s school also creates a custom t-shirt every year, with three designs created by the students. Then, they send out sponsorship letters to local businesses asking if they want to submit a donation to have their name or logo on the back. It gives everyone something to remember the event and can raise plenty of money in the process.

Jeremy and his colleague Steve at KeyBank organize their company kickball game every year. People were paying the donation to play, but their fundraising flatlined a bit. They wanted to incentivize players to up those numbers, so they decided to ask local businesses for raffle prizes. Top fundraisers on each team got a prize, anything from dinner and drinks at a local brewery to movie tickets and ice cream. Reach out to businesses for potential prizes your participants can’t resist winning.

Deana Harb is the mom of a childhood cancer hero and a longtime Kick-It organizer. All year, her local Applebee’s offers to open its doors for community breakfasts. All they needed to do was sell tickets for $10 dollars and they got 60% of the profits for their event. It was as simple as that. Once they had student volunteers signed up, that flapjack fundraiser got them off to a great start. See if any local restaurants would be willing to kick in a percentage of their day’s profits or let you take over for a community meal!

5. Asking for a minimum donation to play (and bring pizza)

Before getting people invested in fundraising, the first step for Jeremy at KeyBank is signing up participants with an added slice of incentive. A local pizza parlor donated pies for them to have at their sign-up table during lunchtime, so a hungry passerby can’t help but wander over to their table. Everyone who signs up pays a minimum donation and gets a slice of pizza while they’re at it. Those dollars get them started before the real fundraising starts.

Setting up games in your local park or rec center is easy and people of all ages can participate! Get started today. If you want any additional fundraising ideas, check out these tips you can use before game day.

Kick-It, formerly a program of Flashes of Hope, is a national charitable athletic campaign to raise money for much-needed childhood cancer research. Kick-It partnered with Alex’s Lemonade Stand Foundation (ALSF) in 2017 in order to further the vision of a 10-year-old boy with cancer who wanted to help other kids like him. This partnership emerged from their similar beginnings as both charities were founded by children battling cancer. Learn more here.